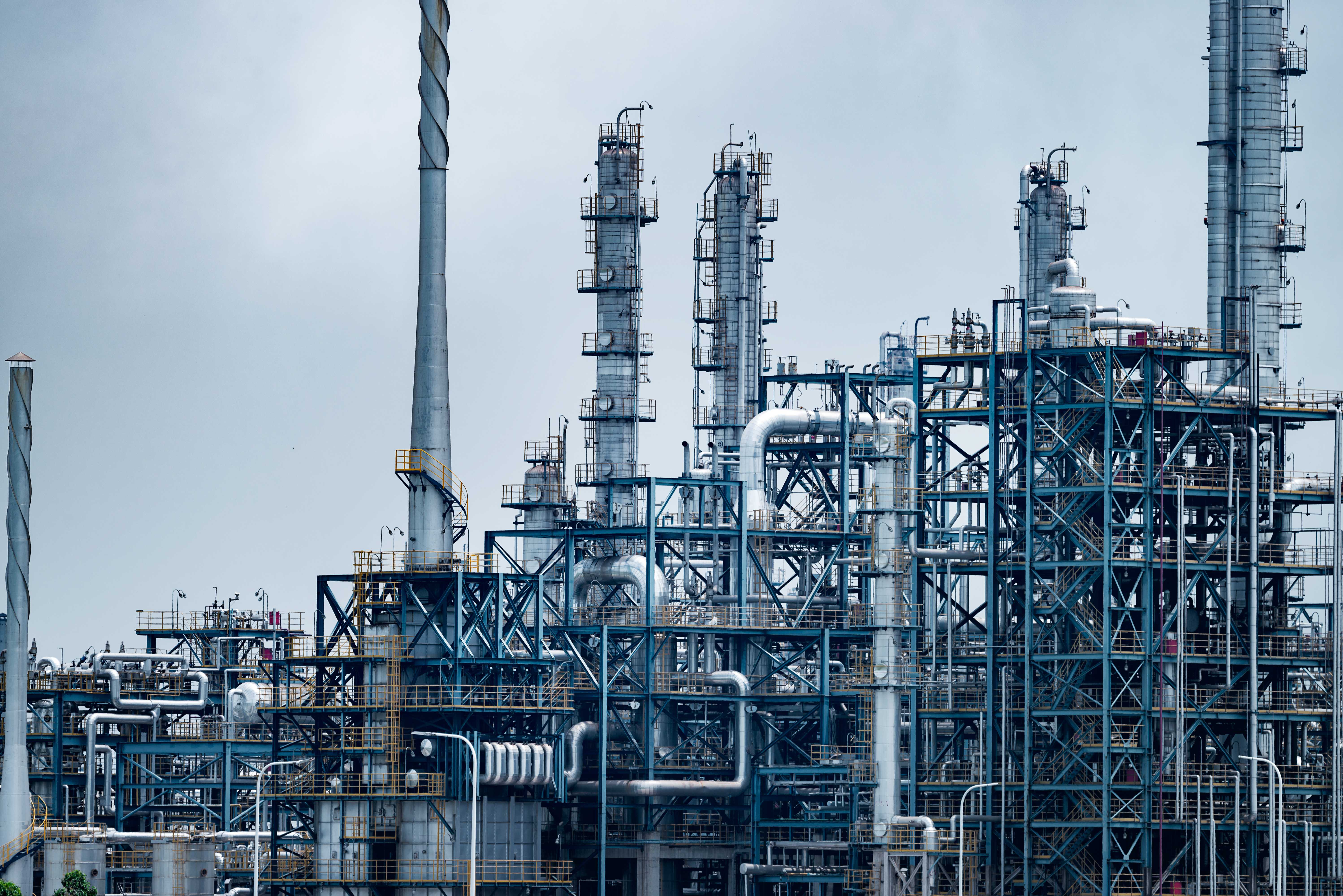 Fluid catalytic cracking and hydrocracking produce a variety of heating and transport fuels including diesel and gasoline. Cracking is a secondary part of the crude oil refining process. The first step in the refining process is the separation of fossil fuel hydrocarbons. The distillation process separates crude oil hydrocarbons into small, medium, and large molecule batches. Cracking is the refinement of the extra-large hydrocarbons left over after the distillation process.

The two most common methods of hydrocarbon cracking — fluid catalytic cracking (FCC) and hydrocracking — are both processes specific to big, long, heavy hydrocarbons. Both follow the distillation process that separates usable hydrocarbons from those that require further refinement. And both make usable transport and heating fuels out of the otherwise use-limited residual fuel that remains after the distillation process.

Distillation Refinement is the Boiling of Crude Oil

Why Some Hydrocarbons Do Not Distill

Crude Oil Components at a Glance

The composition of crude oil is almost entirely hydrocarbons, save the trace contaminants that exist. “Crude oil is a naturally occurring, unrefined petroleum product composed of hydrocarbon deposits and other organic materials. A type of fossil fuel, crude oil can be refined to produce usable products such as gasoline, diesel and various forms of petrochemicals.”

It is debatable as to whether there are actually two classes of saturated hydrocarbons.

Cycloalkanes are simply alkanes that loop. The carbon atoms at each end of the molecular chain bond together. The result is a hydrocarbon ring. While the structure of cycloalkanes is different than that of alkanes, the chemical composition is the same. “Alkanes are organic compounds that consist entirely of single-bonded carbon and hydrogen atoms and lack any other functional groups. They have the general formula \(C_nH_{2n+2}\) and can be subdivided into the following three groups: the linear straight-chain alkanes, branched alkanes, and cycloalkanes. They are also saturated hydrocarbons. Alkanes are the simplest and least reactive hydrocarbon species containing only carbons and hydrogens.”

The categories and classes of hydrocarbons are relevant to fuel types. For example, “Petroleum-derived diesel is composed of about 75% saturated hydrocarbons (primarily paraffin including n, iso, and cycloparaffins), and 25% aromatic hydrocarbons (including naphthalenes and alkylbenzenes). The average chemical formula for common diesel fuel is C12H24, ranging approximately from C10H20 to C15H28.”

The significance of Hydrocarbon Categories and Classes to Cracking

Fluid catalytic cracking is a means by which large, dense, hydrocarbon molecules are broken down. “Fluid Catalytic Cracking Units (FCCUs) are a secondary conversion operation within more complex refineries, and is used to produce additional gasoline, primarily, from the gas oils produced in the atmospheric and vacuum distillation units.” It is a single stage process. Once the hydrocarbons are cracked, they are fed into the distillation column to be separated with the crude oil contents.

The hydrocracking process, on the other hand, is a several stage process.

The hydrocracking process is gaining popularity because it accomplishes more than just the cracking of hydrocarbons. Additionally, the hydrocracking process removes the contaminants commonly found in residual oil. “Hydrocracking is one of the most versatile processes for the conversion of low-quality feedstocks into high-quality products like gasoline, naphtha, kerosene, diesel, and hydro wax which can be used as petrochemical feedstock. Its importance is growing more as a refiner’s search for low investment option for producing clean fuel. New environmental legislations require increasing and expensive efforts to meet stringent product quality demands.”

Hydrocracking technology is a two-part process. Both steps are necessary for the conversion of heavy, dense hydrocarbons that come from a wide range of refinery feedstocks into high-value naphtha or distillate products. Hydrocracking, of all the cracking technologies, has the capacity to convert the lowest quality feedstocks into high-quality transport and heating hydrocarbons.

Hydrocracking is a two-stage process combining catalytic cracking and hydrogenation. The hydrogenation portion of hydrocracking is the addition of hydrogen atoms to unsaturated hydrocarbons, aromatic rings. “due to the fact that aromatic rings cannot be cracked until they are fully saturated with hydrogen, the hydrocracking process allows for the processing of more aromatic feedstock, including the byproducts of catalytic cracking (e.g. light cycle oil).”

In other words, the first step in the hydrocracking process is the saturation of unsaturated hydrocarbons. The second step is the cracking of those hydrocarbons in order to make low viscosity fuels

Cracking hydrocarbons in order to increase the total amount of usable fuel in a barrel of crude oil is becoming increasingly important. Each day, the world produces over a million barrels of FCC gasoline, As the world becomes more and more dependent on heavy crude oils like those found in the tar sands of Venezuela and Canada, FCC and hydrocracking will only become more important.