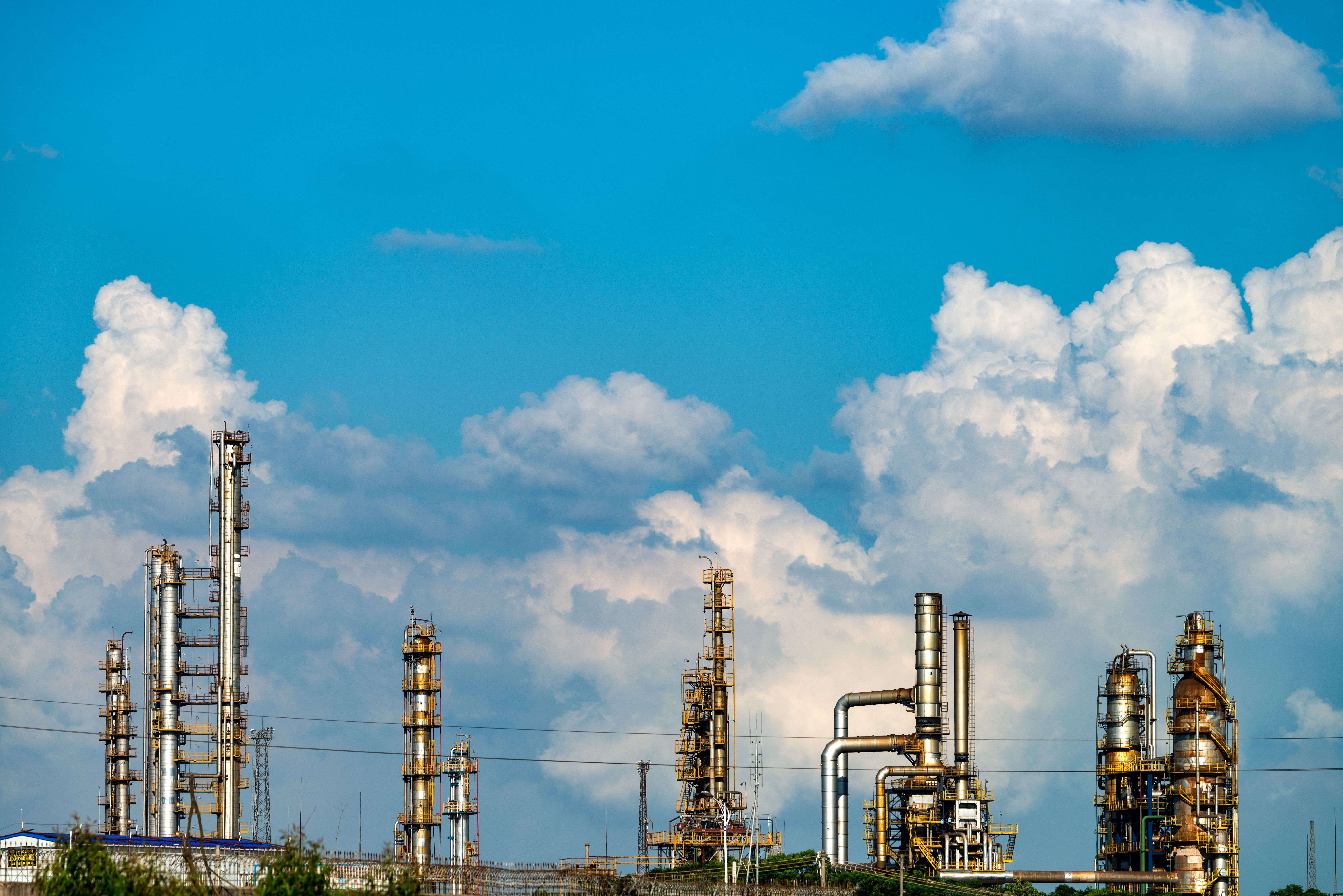 Refining Processes of Diesel vs Gasoline

The ratio of the different types of hydrocarbons in a fossil fuel mixture determines the fossil fuel type.

The purpose of the refining process is to separate the hydrocarbons for the two types of engines.

There are three means by which to oxidize fossil fuels. The first is to expose a fossil fuel to a flame. Spark-fired engines use a spark to ignite the fossil fuels in a combustion chamber. The second means of oxidizing a fossil fuel is with the application of pressure. Compression engines — like those found in diesel engines — condense the space around a fossil fuel until it ignites.

The third means of igniting fossil fuels is exposure of a fossil fuel to extremely high temperatures. But, before fossil fuel hydrocarbons auto ignite, they vaporize. Crude oil distillation is the process of heating crude oil until the hydrocarbons vaporize, then separating the vapors from the liquid crude.

It is by boiling crude oil that refineries produced different fossil fuels from a barrel of crude oil. The process of heating crude oil to separate and capture different hydrocarbon vapors is “fractional distillation.”

Naphthas are the fossil fuel hydrocarbons to separate from crude oil as the temperature rises during the distillation process. A wide variety of chemicals, from the chemicals found in paint and toothpaste to those in plastics and carbon fiber, require naphtha. Naphtha’s separate at a temperature range of between 185 and 350 degrees.

The first step of the atmospheric distillation process is the heating of the oil in the “crude unit,” the distillation column. Inside the crude unit, water mixes with the oil. The purpose of the water is to desalinate the crude oil. Sodium chloride is the most common salt found in crude oil.

The water absorbs the salt. The crude unit heats and vaporizes the saltwater, then removes it via a valve into a low-pressure storage and removal tank.

It is the movement of vapors from a high-pressure unit — the distillation column — into a low-pressure storage tank from which the process gets the name “vacuum distillation.”

Maverick Engineering Incorporated explains, “The desalted crude then proceeds through several more pre-heat exchangers, absorbing heat from the hot cuts off the atmospheric column once more.” Next, the crude oil moves into a heater where its temperature increases to between 650 and 700 degrees Fahrenheit. At those temperatures, crude oil becomes a mixture of liquid and vapor. The vapor rises, condenses, and drops back down the sides of the atmospheric distillation column.

The vaporizing and condensing cycle separates the hydrocarbons far more precisely than simply boiling the crude into infractions. “The highest boiling point liquid condenses on the tray just above the bottom flash zone, and the lowest boiling point liquid condenses at the top of the column.” Once the distillation column fractionalizes the crude oil into its component parts, the hydrocarbons at each level are drawn into storage units.

But, even though the hydrocarbons that make up gasoline and diesel separate from crude oil during the distillation process does not mean the gas and diesel hydrocarbons are ready for distribution. Before distribution, it is necessary to refine distilled diesel and gasoline.

Post-Distillation Refinement of Gasoline and Diesel

In relation to the refinement of small hydrocarbon, light fossil fuels, the post-distillation process of diesel is simple. In some cases, diesel is ready for distribution almost immediately after the distillation process. “The diesel fuel produced by a refinery is a blend of all the appropriate available streams: straight-run product, FCC light cycle oil, and hydrocracked gas oil. The straight-run diesel may be acceptable as is or may need minor upgrading for use in diesel fuel prepared for off-road use.”

However, on-road diesel requires further refinement. “To meet the 15 ppm sulfur limit, all the streams used to prepare diesel fuel need hydrotreating to lower the sulfur concentration.” In addition to reducing the sulfur count in diesel, adjusting the cetane rating is also necessary.

The cetane rating of diesel is the equivalent of the octane rating in gasoline, but the objective is the opposite. “Cetane number is an indicator of the combustion speed of diesel fuel and compression needed for ignition. It is an inverse of the similar octane rating for gasoline.”

The purpose of both cetane and octane rating is to change the compression resistance of a fuel. As mentioned earlier, fossil fuels will ignite/combust/burn when placed under enough pressure. In the case of compression engines, the pressure is how an engine combusts a fossil fuel. In a spark-fired engine, however, compressing ignition is a malfunction.

Spark-fired engines have the opposite problem. Diesel engines require diesel with lower compression resistance to operate in cold conditions. Gasoline engines, because they are spark-fired, must avoid compression ignition.

Hydrocracking Diesel Fuel in a Refinery

Hydrocracking is the process of breaking large, long-chain molecule hydrocarbons into smaller hydrocarbons. The purpose of breaking hydrocarbon chains into smaller chains is to change their flashpoints and compression resistance. “In a refinery, the hydrocracker upgrades VGO through cracking while injecting hydrogen. This yields a high volume of high-quality diesel and kerosene product. The hydrocracker is particularly valuable in a refinery that is trying to maximize diesel production and reduce residual fuel oil.”

The process has two stages. Each stage occurs in a separate reactor vessel. In the first stage, a hydrotreating catalyst saturates aromatics — one of the two types of unsaturated hydrocarbons — with hydrogen. At this stage, the reactor vessel also removes the sulfur and nitrogen contaminants from the straight-run diesel. In the second stage, a different reactor vessel breaks now-saturated hydrocarbons into smaller parts and, again, saturates any unsaturated molecules or molecule chains with hydrogen.

The result of hydrocracking is highly refined, contaminant-free diesel with a lower compression resistance than straight-run diesel.

But again, the refining processes of diesel vs gasoline are different. The gasoline version of hydrocracking is catalytic cracking.

While the distillation of crude oil produces gasoline, gasoline can also be the product of the residual fuel left over after the distillation process. It is possible to make gasoline from residual fuel using a process called fluid catalytic cracking. “In refining, the FCC is the most common unit used to upgrade heavier distillation cuts to light products. The FCC takes VGO and similar intermediate streams and cracks them using heat in the presence of a catalyst. The primary product is FCC gasoline, which is used in gasoline product blending. The FCC is particularly valuable in a refinery that is trying to maximize gasoline production over residual fuel oil.”

The process of FCC is one in which heat and a catalyst to break the long-chain molecules present in residual fuel into smaller molecules chains. Because the gasoline originates from a very high-octane fuel, FCC gasoline generally has high octane. It also has low sulfur.

Octane Vs. Cetane Principal Difference between Gasoline and Diesel Refinement

Removing contaminants and producing the cleanest, highest quality fuel is the purpose of all fossil fuel refining processes. But, there is another purpose, at least with respect to gasoline and diesel.